Tâmpa is a mountain, part of the Postăvarul Massif, located in the southern part of the Eastern Carpathians and almost entirely surrounded by the city of Braşov. Its elevation is 960 m, almost 400 m above the city.

near Mount Tâmpa at The Newest Hotel in Brașov, Belfort Hotel Brașov

Natural Reserve Tampa (in the background), a mountain in the city of Brasov. Photo: Nicu Farcas.

The first traces of civilization

The oldest traces of civilization on Tampa date back to the Dacians. Archaeologists have discovered near Tampa a well with bones of their time, which proves that pagan worship(Paganism) has been practiced here.

One of the seven castles that gave the German name of Transylvania: Siebenbürgen. The construction between the tip and the saddle of Tampa is supposed to have been raised during the Teutonic knights, between 1212 and 1218, and if not, then certainly strengthened. At 1241, it is barely time for some families of the Brașov people to shelter it from the Tartar invasion. In 1395, before the war with the Turks, Mircea the Elder sheltered his family in the city. After 24 years, in 1421, the fortress became a refuge for the population of Brasov, threatened by Sultan Murad II. In the same year, the fortress is given as a pledge to the Sultan, the Turks dominating the city. The fortification becomes so dangerous for the Brasov and the whole area. After I manage to redeem it with the help of Iancu de Hunedoara, the townspeople decide to demolish it. The resulting stones were used to strengthen the fortress valley that was being built. 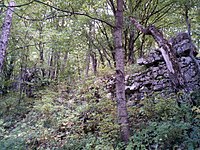 The ruins of the fortress

“The fortress consists of a stone enclosure and a kind of small polygon bastion on the western side at the top of Tampa. There were small defense towers along the walls. Inside the southern wall were discovered the traces of small rooms that created the hypothesis that the fortress would be a pre-Roman era “. There is also a deep fountain and a chapel in the city. The fact that the fortress was surrounded by ravines in three parts, and the fourth was well defended, made it one of the most impassable cities in Transylvania and Europe (in fact, it was never occupied, except through treaties).

It was served by a shady area in the valley, called Cutun, to which it was connected by the Knights’ Road. Costantin Lacea said in 1910 that “even today, the Romanian population, headed by the costenians (inhabitants of the Coastei and Costitului Street), led by the Curcani Juni, come out on the second day of Pentecost to the Citadel on Tampa, on the Cross of Cut down and spend there. The elders tell that their youth was playing up in the Fortress of Tampa. ” 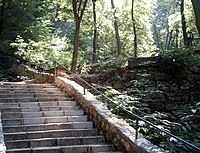 The Ruins of the Tower of the Shoes, with a wall section

At the foot of Tâmpa were built in the fifteenth century two watch towers, joined by the fortress through a row of walls, which also extended from the towers to the summit of the mountain. Probably left behind in the fire-fighting era, the two observation points were definitively removed in the eighteenth century (two stamps of the same age present, in turn, Tampa with and without them).
The Knife Tower, at the Weavers’ Bastion, had an open view of Shchei. Today there is no trace of it. The Tower of Shoes, located above the Post Office Bastion, dominates Blumana and Curmatura (the area between Tampa and Melcilor Hill). Nowadays we can also see the platform on which it is located, as well as a large part of the base of the connecting wall that crosses the mountain.

The Crucifix on Tampa (17th century)

On the map compiled by Giovanni Morando Visconti in 1699, above Brasov, a cross can be seen on the top of Tampa. This is confirmed by the author, Sas Thomas Tartler, who states: “… there was a great cross with a crucifix, because the Papists called the Tampa Hill of the Cross (Kreuzberg).” The cross belonged to the Romanians from Şchei, who raised (with or without the approval of the city authorities) crosses and crosses throughout the entire area, sometimes even very distantly from the walls of the city. A chronicle places the date of its construction on August 2, 1696, but attributes it to the “carpenters” of Emperor Hussein.

The chapel (top left), as it appears in an engraving from 1750

“In 1714 (after other sources 1696 or 1718), Braşovian Senator Johann Draudt, passed to Catholicism, raised Tâmpa a chapel,” bearing St. Leonard’s relic. After its construction, on several occasions thieves or lutherans robbed or defiled the worship place. “On June 10, 1737, the second day of Pentecost, at 3 o’clock in the afternoon,” the lightning struck the chapel in front of the altar, a German tailor-made tailor and his wife who had been there … He was beaten And their dog. ” Over time, the chapel was ruined. “Long time afterwards, Tampa was named Capele Hill (German Kapellenberg).
The guilt of the destruction was often thrown on the Romanians in Shchei: “Bald nachdem die Gebaut Cape, haben die Wallachen die Thur erbrochen u. Eins u. Das andere daraus geraubt, die Thur aber hinunter geworfen … “, that is, the Romanians in Shchei broke the door, which they threw in the valley and stole a few objects from it.

In 1849 , after the tsarist army of “pacified” Transylvania , at the initiative of Lieutenant-General von Hassfort amounted Tampa pyramid monument with the inscription “Russia et Austria MDXXXIL units” . “This monument existed until 1869 . Destroying it because of the weather (according to other sources because more humane, see below), from April 7 , asked magistrate Centumvirilor community “Russian monument be removed rubble collapsed soon” “.
Says George Bariţ “in October and November 1849 troops emperor of Russia emerged successively in Transylvania without leaving behind unpleasant reminiscences. Namely General Hasford pre STET as Brasov, mediate a monument above the city, on Mount Tampa, where they see the ruins of an old chapel. The monument was set Registration ‘: Russia et Austria units . By 1861 hands ruined enemies that monument. ”

Celebrating 1,000 years of the arrival of the Magyar tribes in Pannonia , amounted impressive statues in seven cities of the ancient Hungarians , to commemorate the event. Thus, “in 1896 , Tampa amounted column with capital sitting on a character depicting an archer Dynasty Arpadian. For most citizens of Brasov, this statue 20 left me as the statue of Arpad , the Duke who led the Hungarian tribes in Pannonia “. The stone was brought, using cableways, Valley City, and to prevent the effect of weathering, the statue was equipped with a lightning rod. The final cost for raising amounted to 22.585 florins . The documents say that some Ilie Cătărău with Timotei Kirilov had dynamite based socket in September 1913 , succeeding to deteriorate. Ruins results remained on the mountain until 1966 when they were removed by the authorities. Today the head of the statue is in the Evangelical parsonage Brasov and Tampa there are only the foundation base.

The restaurant from the cave Bethlen (1890)

In Tampa rock cave was set at 1890 a brewery restaurant, which later would receive the name of Bethlen after András Bethlen, Hungarian agriculture minister who visited Brasov in 1891 . Every day the renter who ruled stopover for tourists climb the 25 coils of Tampa, with its colt with bottles in the back. In the evening, many stayed to admire the city lit up at night. Extended by a terrace above the slope in 1905 , after 1948 it was called “chalet restaurant ‘Tampa’.” On 23 March 1977 , following a tragic accident fault the staff, the lodge burned down entirely.

Today there are still only a beautiful terrace offering panoramic views over the city and traces of “tubs” of stone cold bottles small cave. In 2001 the Brasov County Council lifted in a cross marble, and 2006 replace the letters that compose the name of the municipality (after previous, in 2004 , had been torn by the wind) to the right of the terrace, providing them with lighting art at night.

Built in 1865 , Casa de tir ( Schützenhaus in German) has long been an attraction for men Brasov. Besides the function suggested by the name, Casa truck also had a bowling alley and a fine restaurant kept the same Geist who was also the location of Tampa, in the cave. Lately, parties remained the only activities that took place in this place adorned with hunting trophies and models of knights armor steel. The building suffered a serious fire in 1916 and remained derelict for a long time. Today, the place is Forest High School “Dr. Nicolae Rucăreanu »Brasov. Today these lands are claimed by the Evangelical Church in the city.

According to the inscription found on construction, “Apaductul Brasov City was executed in the years 1891 – 1892 according to the plans and under the leadership of chief engineer of the city, Christian Kertsch” , who will build and villa of the same name in the center of Brasov (now demolished, on instead they are building “Modarom” and hotel “Capitol”). The water was brought by steel pipes and tiles, just from a great distance, after Mount Tampa. Due to the deplorable situation in which there were pipes and high costs of replacing the network, the municipality was obliged to supply the city with water aqueduct. However, many people continue today to believe that taking “spring water” from the aqueduct and wine to procure large quantities … Today, walking by mountain towards Rapa hell, one can see lines tile broken and a high memorial plate section of another engineer, P. Bartusch.

Recently renovated, after suffering a fire, “a clearing” is a rustic restaurant located at the foot of Tampa, about half sidewalk there. Built in the early twentieth century, served as a stop Braşov strolling the promenade under Tampa. Next to the cable car turn location in less than three minutes, connecting with the Panoramic Restaurant, located on the mountaintop.

After World War II , it was circulated a legend that says that during World War there was a tunnel connecting Town Hall with a cave located on the saddle Tampa . The story goes that in this tunnel, German prisoners were held, with two entrances blocked. Confirmation of the first part would lead to confirmation of the theory underground lake (dried up, however), otherwise, the possibilities of the time, it was impossible to pierce a vertical tunnel, measuring 350m, as much as would be the difference in level between the two outputs.

What we know for sure today is that Tampa has it 3 or 4 tunnels of which only one can be driven entirely today. The latter link Town Hall of a former fortress tower at the foot of Tampa (probably Tower Knife makers or Bastion Drapers ). However grille are closed today due to the danger of collapse posed. A war veteran story that the bombing in 1943 – 1944 blocked the exit of a tunnel housing, burying alive all those who had taken refuge there.

In the early 70s , on top of Tampa was built a television relay with a restaurant. Today, the relay picks up the signal station on Postăvaru and sends it back to Braşov (initially with a capacity of 10 kW, the lamps, today only 2 kW) and restaurant “Panoramic” , being in a privileged position, offers the dining room, a superb view of the city. The restaurant belongs to the company Aro-Palace. Under relay is also above the cable car station. Before 1989 , leaving the cable car station, visitors were greeted by a huge brown bear stuffed, standing menacingly in two paws.

At the same time building complex, within walking distance, and a mast went up to the Romanian flag . In 2004 , the Brasov County Council provided its festive lighting and installed here a strong reflector type laser that illuminates the sky much of each evening.

Accomodation in Brasov, near Mount Tampa at the newest hotel in Brasov,  Belfort Hotel Brasov .